2016 in Context: 10 Clinton Moments We Wish We Could Forget


Gil Troy is the author of The Age of Clinton: America in the 1990s, just published by Thomas Dunne Books of St. Martin's Press. His next book will update Arthur Hertzberg's The Zionist Idea. He is Professor of History at McGill University. Follow on Twitter @GilTroy 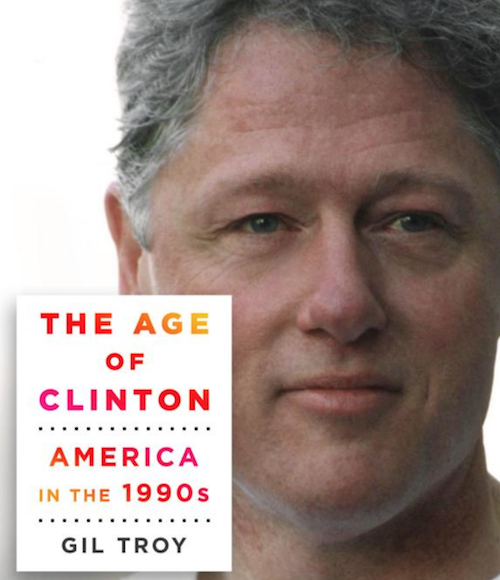 Click HERE for more installments of 2016 In Context:  Gil Troy's commentary on the closing days of the election.

Three weeks from today, Americans finally will have a chance to vote for president of the United States -- hundreds of other offices on ballots across the country. As a presidential historian who has written histories of presidential campaigning, of various presidents, of First Ladies, including Hillary Clinton when she was in that symbolic role, and, most recently, of the Clintons and the 1990s in The Age of Clinton: America in the 1990s, every day until Election Day I will post an article putting this election in historical context, trying to explain this wild and wacky race using history as our guide. So here it goes, with hashtag #2016incontext

As Hillary Clinton runs for president, although as I argued in Time last week, she should resurrect her huband’s centrism, she should not promise “more of the same” regarding her husband’s presidency. The Nineties were a great decade of peace and prosperity, and Bill Clinton’s presidency had many highlights. But no one wants a rerun – especially of these low points of Bill Clinton’s presidency, as described in my book, The Age of Clinton: America in the 1990s .

I know we have reached the point in the campaign where Dems have no patience for any criticism of their candidate – so, don’t worry – tomorrow I will send out 10 highlights from the Clinton years!

In December, 1993, as the rookie president and his First Lady hosted rounds of Christmas parties, the Clintons were rocked by detailed accusations, leaked by Arkansas state troopers to CNN and the American Spectator, describing an adulterous governor with countless conquests including one named “Paula,” always trying to dodge his foul-mouthed, sexually-frustrated wife.  As they scrambled to defend their boss, one Clinton aide admitted, “I think I'm going to throw up.”

As the first Baby Boomer president, Bill Clinton was a lot less discrete than his predecessors. On April 19, 1994, when asked during an MTV-sponsored town hall, “Is it boxers or briefs,” Clinton chuckled, and broadcast his underwear preference: “Usually briefs.” Not surprisingly, during this decade, use of the acronym “TMI” became widespread.

3. Failing to stop the Rwanda genocide

4. National Homeownership Strategy in 1995 contributes to the 2008 crash

With the best of intentions, President Clinton and his Housing Secretary Henry Cisneros launched a National Homeownership Strategy in June, 1995. By judging institutions by how many mortgages they approved, especially for minority buyers, the Administration bullied banks and other lenders to lower their standards. Unfortunately, easy credit inflated housing prices and burdened many poor people with unmanageable mortgages. Thirteen years later, during George W. Bush’s presidency, many bad mortgages, bundled into vulnerable mortgage-backed securities, would help crash the economy, making the 2008 recession a bipartisan achievement. Cisneros later admitted that “people came to homeownership who should not have been homeowners.” He confessed: “families are hurt because we as a society did not draw a line…. We were trying to be creative.”

5. The mysterious reappearance of the Rose Law Firm billing records – in the Clintons’ private book room.

In a cruel twist–or a fumbled manipulation--on January 5, 1996, just as Hillary Clinton was launching her nationwide book tour for It Takes A Village, the Clintons’ private secretary Carolyn Huber announced she had stumbled onto missing records  in the Clintons’ “book room.” Five investigative bodies had requested the billing records from Hillary’s old Rose Law Firm, to see how involved she had been in legal cases connected to the Clintons’ failed real estate investment, Whitewater. The records suddenly appeared two days after the statute of limitations expired on one aspect of the case, the $60 million bankruptcy of Madison Guaranty, a failed Savings and Loan. The records showed more involvement in the bank’s affairs than Mrs. Clinton remembered, billing sixty hours over fifteen months.

6. Turning the White House into “Motel 1600” to raise campaign funds from celebrities – and mysterious Chinese donors.

While running for reelection in 1996, Clinton's subtle but obvious peddling of access for political contributions had critics calling the White House “Motel 1600.” The quid pro quo was not unprecedented; the Clintonian brazenness and scale were. One-hundred-and-three White House coffees raised $26.4 million, averaging $54,000 per Danish eaten. Lincoln Bedroom sleepovers pulled in at least $100,000 per night. In 1997, allegations that Chinese agents had contributed generously to the Clinton campaign embarrassed the Democratic National Committee into returning $2,825,600 in improper donations.

7. Trying to prove he was not a “McGovernik” liberal, Clinton enraged his gay allies by signing the Defense of Marriage Act in September, 1996.

DoMA defined marriage as heterosexual, while permitting states to disregard gay marriages from other states. “[I]f there are people here who don’t like it,” Clinton snapped, “well, I’ve created seven and a half million new jobs and maybe it’s time for them to go out and take some of them.”

Embarrassed nonetheless. Clinton signed the law at 12:50 AM, without photographers. He ignored this craven moment in his memoirs, and later endorsed overturning DoMA.

8. “I did not have sexual relations with that woman, Miss Lewinsky.”

Rumors in January 1998 of a presidential affair with a White House intern prompted a series of increasingly clear denials, culminating with Clinton’s infamous, finger-wagging proclamation: “I did not have sexual relations with that woman, Miss Lewinsky.” As the scandal grew – and triggered political and legal headaches for Clinton -- he also dodged a question during sworn testimony by saying “it depends what the meaning of the word is, is.” Ultimately, a stained blue dress proved that Clinton was guilty of adultery, and of lying to the American people. Fortunately for him, the Republican witchhunt against him triggered its own backlash and saved Clinton, although he was impeached.

9. The Lewinsky scandal, along with a nationwide refusal to take seriously the threats of Islamist terrorism, tragically set the stage for 9/11.

In August, 1998, as proof of Clinton’s deceit materialized, Osama Bin Laden’s al Qaida terrorists bombed two American embassies in Africa. On August 20, three days after Clinton’s testy grand jury testimony in the Lewinsky matter, the US military fired more than 75 Tomahawk cruise missiles at targets in Afghanistan and the Sudan. The barrage missed bin Laden by a few hours, probably due to Pakistani intelligence leaks. Bin Laden survived.  The resulting controversy over the attack on the Al-Shifa pharmaceutical factory in Khartoum inhibited Clinton when other opportunities arose. Captured Islamist terrorists subsequently admitted that America’s passivity emboldened them.

10. Even in the final moments of what Clinton had promised would be the “most ethical administration” in “history,” when both Clintons should have learned the importance of acting and appearing upright, their sloppy ethics and sense of entitlement again trumped good sense.

Bill Clinton issued 176 pardons and sentence commutations, with many of the parolees like Marc Rich enjoying special access to him. Meanwhile, Hillary Clinton accepted $190,027 worth of gifts to help fill  their two new houses, while taking some furniture donors had deeded to the White House. Bill Clinton, a brilliant politician, clearly was morally tone deaf and personally hollow; while his wife was often co-conspirator, not just victim or enabler.