For decades now, major left-wing parties throughout the West have been bleeding support from the working-class voters whose interests they claim to represent.

In the mid-20th century, a voter’s socioeconomic position strongly predicted his or her partisan allegiance: In Britain, France, and the United States, voters with low incomes and only a high-school education tended to support left-of-center parties, while high-income, highly educated voters aligned with those of the right. In all three nations, this is no longer the case. All else equal, lower-income voters are still more likely to “vote blue” in the U.S. But that tendency is much weaker than in the past. Meanwhile, the relationship between educational attainment and partisan preference has flipped: Now, college-educated voters are more likely to support putative workers’ parties, while non-college-educated ones tend to favor conservatives.

The French economist Thomas Piketty illustrated these trends in a 2018 paper: 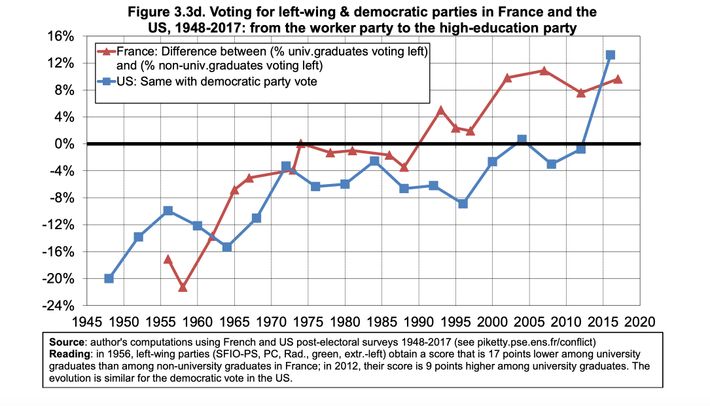 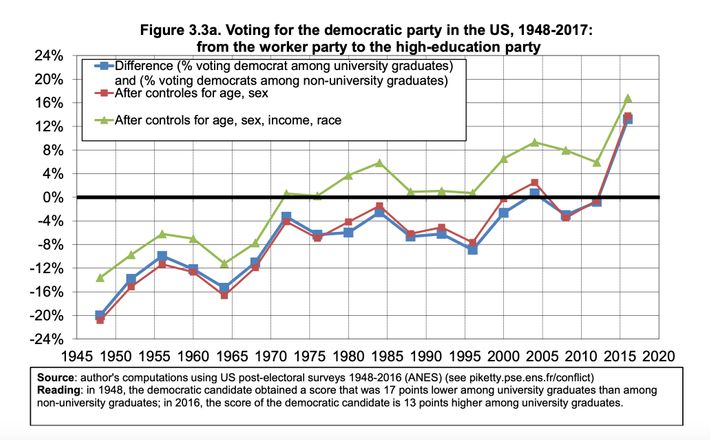 The decline of class-based voting has long troubled the American left. And for good reason. Voters without four-year degrees are more numerous than those who have them, and America’s political institutions give the former disproportionate influence over election outcomes. For this reason, among others, the Republican Party has fared much better in the era of class depolarization than it did in the preceding one.