Romantic Angst in the 1950s Drought Stricken Midwest of The Rainmaker 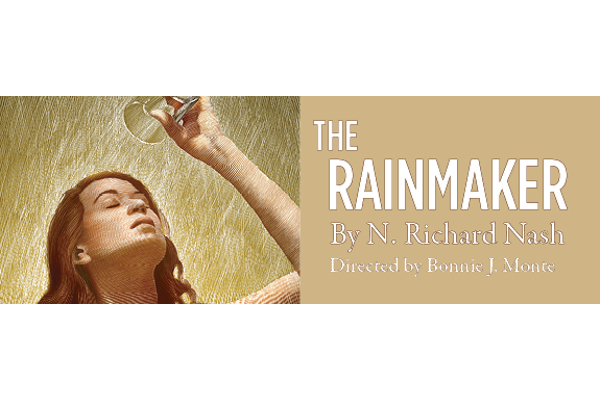 I was a little boy when the movie The Rainmaker, starring Burt Lancaster and Katherine Hepburn, debuted in 1956. I saw it in a tiny summer movie house on Cape Cod, Massachusetts. It had not rained on Cape Cod for weeks and people were desperately praying for it. When the movie about a professed ‘rainmaker’ ended, everybody piled out of the theater to discover that it was pouring- I mean pouring- rain. Dozens of people, ecstatic, raising their arms to the heavens, jumped around amid the wet torrent of raindrops shouting “rain!” “rain!”

I remembered that moment all of my life.

So, it was with eager anticipation that, after more than 50 years, I saw N. Richard Nash’s play The Rainmaker last weekend at the Shakespeare Theater of New Jersey at Drew University, Madison, New Jersey. Would the old magic of the charlatan rainmaker still be there? Would the powerful grip of the old film still drown its audience in emotion?

It sure does. The Rainmaker, after a slow and bumpy start, succeeds as an emotional and downright wonderful drama about a crooked rainmaker, Starbuck, who arrives at the home of a young woman, Lizzy Curry, single with no prospects of a relationship, who is on the road to becoming an Old Maid. She lives with her dad and brothers in the Midwest of the early 1950s in the middle of a long drought that has terrorized the farm population there.

The Curry family is distraught over the lack of rain, but more upset over daughter Lizzy’s romantic emptiness. Her shadow relationship with a local deputy sheriff, File, seems to have fallen apart and there is no one else. She is berated by brother Noah in front of the whole family. He tells her that she is “plain” and will never get married, something she fears herself. The verbal lashing is so brutal that several members of the audience gasped and some yelled out “stop it, stop it.”

Her other brother and Dad are very encouraging, but heartbroken that she is, indeed, on her way to spinsterhod hood, or will be, as Lizzie laments, the “old aunt who brings gifts to nieces and nephews so that they’ll like her.”

And then along comes the gregarious, raucous and thoroughly lovable swindler, Starbuck, who, for a price, guarantees them, and the dried up-town, rain at last.

It is quickly evident that Starbuck is as slick as a bar of soap. He is the President of the Flim Flam man society, if there ever was one. Lizzy likes him, though, even though she sees right through him. The family likes him too, because he is honest in his duplicity and he is nice to Lizzy.

There is a romance and Lizzy falls for Starbuck, but knows that he is going to leave her and continue wandering through America, charming as many people as he can, alleviating them of their life savings. What about File, though, who is suddenly back in the picture when the police start to chase Starbuck? And her other brother and father, who previously supported her no matter what?

The Rainmaker is not just a story about a charlatan and his hatful of promises. It is about a plain, simple girl whose brother tells her she has no merit and is ugly.

No merit? Not attractive?  Starbuck sets her straight when he informs her, and the audience, that ‘all women are beautiful.”

Starbuck knows that and so do we all. The play is about Lizzy’s understanding of that, and everybody else’s, too.

Director Bonnie J.  Monte does a splendid job of making a 1950s play relevant again. She keeps the action of the rainmaker story moving along nicely while at the same time – and this is tough – keeps alive the story of Lizzy and her feelings. She makes Starbuck into a lovable flim flam man, somebody you know is all bad but see as all good. He is, in a way, like F. Scott Fitzgerald’s Jay Gatsby – a criminal who is more honest than all of the “honest” people around him.

Director Monte gets sterling work from her cast of talented actors.  Mark Elliot Wilson is the steadfast and loving dad, H.C. Curry.  Benjamin Eakeley does well as Noah Curry, the horrid brother (who, by the way, has no woman of his own. Wonder why?).  Isaac Hickox-Young plays brother Jim. Nick Plakias is deputy sheriff File. Monette Magrath is the adorable Lizzy and Anthony Marble is dazzling snake oil salesman Starbuck. They are two very gifted performers and they are the heart of this terrific play.

Most people think the play is set in the dust bowl of the 1930s in Oklahoma, Texas and other midwestern states. It is not. Nash set his story in the drought that swept through Texas, Oklahoma and other Midwest states from 1950 to 1957. During those seven years, Texas only received 50% of its normal rainfall. The number of farms fell by 98,000.  Texas’ rural population declined from one third if the state’s to less than one fourth.  The number of Texans who worked on farms  from 1950 to 1957 fell from  29 % of state workers to just 12% and the price of beef fell by 67%.

How would this story turn out after the play is over? I think that File and Lizzy would marry and have a daughter who was gorgeous. A person would pass them on the street, look at the daughter and say to her “you are so beautiful. You look just like your mother.”