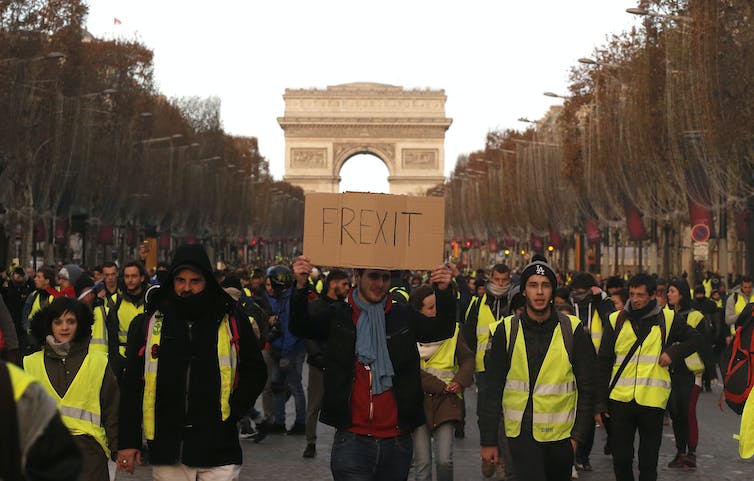 The populist protests roiling France remind me of a similar anti-tax revolt that occurred in Paris nearly 65 years ago.

In January 1955, tens of thousands of French men and women gathered at the Porte de Versailles in Paris to express their disgust for the elites who had burdened their lives with crushing taxes. They had come to hear the populist icon Pierre Poujade, a bookstore owner from the rural Lot valley and the leader of a movement that tried to topple the government of Pierre Mendès-France.

Today, the French government is again facing an existential threat over an unpopular tax, but this time by the “gilets jaunes,” or yellow vests. And even though President Emmanuel Macron has since nixed his government’s plan, the demonstrations show no sign of abating.

I believe that the Poujadist protests, which I am studying as part of a book project on the political economy of France, can shed light on today’s unrest – as well as on the many other populist movements agitating governments across the world. 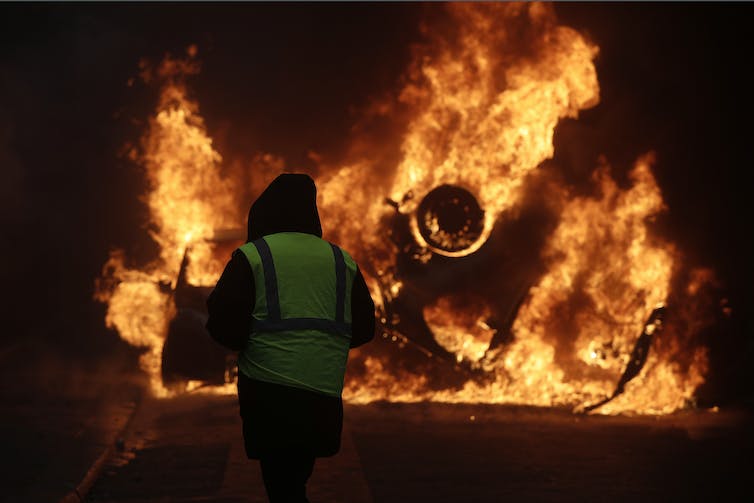 Some of the protests have turned violent. AP Photo/Kamil Zihnioglu

The “gilets jaunes” movement started in November as a response to a fuel tax hike meant as an environmental measure.

Cars, trucks and tractors play a critical role in the lives of rural and suburban French people, and the insensitivity of the government to this reality sparked the anger of these “non-metropolitan” citizens. They have long felt marginalized by city-dwelling French elites, who would barely be affected by the rising fuel prices.

The yellow vest itself perfectly embodies the resulting sense of grievance.

All French drivers are required to keep a yellow vest in their car for emergencies. Practically speaking, therefore, it is a cheap and readily available garment for supporters of the movement.

More than that, the yellow vest is a potent symbol because motorists don it to attract attention in an emergency. For many protesters, that is exactly what they are trying to do by marching through the streets.

But the protests have evolved from a pure tax revolt into something broader, combining a wide range of political views.

And perhaps because the movement lacks a leader, its demands have included everything from reinstating a wealth tax to increasing welfare protections. Students are demanding that the government backtrack on proposed education reforms, while more radical elements want a fundamental transformation in government.

To top it all off, extremists known as “les casseurs” – literally “people who break things” – and anarchists have added violence to what were primarily peaceful protests. As a result, there have been hundreds of arrests and injuries.

Under tremendous pressure, Macron, on Dec. 5, backed away from the fuel taxes. But protests continued on Dec. 8, with more violence reported, and signs that they will continue.

Loose talk among some extremists of violently overthrowing the government, along with a small but growing current of anti-Semitism, has done little to calm the situation. 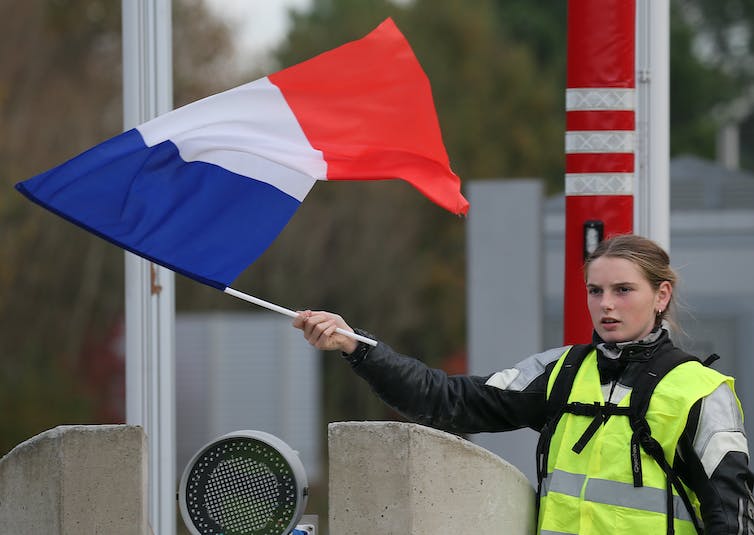 A demonstrator holds a french flag at the toll gates on a motorway. AP Photo/Bob Edme

The past and the present

The perception of burdensome taxes as a symptom of unjust elite rule was something shared by Pierre Poujade and his followers in their day.

His protests – like today’s – represented a populist rejection of “the system,” which the lower middle classes saw as serving only the elite and leaving them behind.

In the 1950s, France was just a few years past the suffering caused by the Second World War, the German occupation and the quasi-fascist Vichy regime. In order to rebuild the country, the leaders of the new Fourth Republic adopted a system of economic planning to channel huge amounts of central investment to selected industries.

Many historians believe this helped drive the incredible growth that France experienced through the early 1970s. But it had a downside for millions of small business owners, especially those outside the big cities, who believed that their high taxes were being used to help privileged big businesses take over the economy.

The “gilets jaunes” are very much following in the tradition of the anti-elite movements before them, especially the Poujadists.

Today, as then, the French economy is doing reasonably well, with its annual growth rate improving since 2012 and currently close to 2 percent. 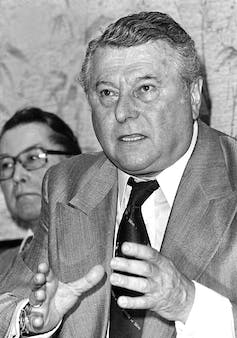 But, as in the 1950s, the times are not good for everyone. The unemployment rate remains stubbornly above 9 percent and is much higher at 15 percent among those without a high school diploma. Data from the French economist Thomas Piketty shows that income inequality has widened since the 1980s.

More importantly, the rising cost of living makes it difficult for members of the lower middle class to make ends meet. And all the while they see the privileged enjoying a lifestyle that they cannot imagine.

All of this echoes the Poujadists, but the “gilets jaunes” of today are responding to economic challenges that are very different from the ones of the past.

Today, what matters most are the uneven gains of globalization. Although deeply integrated world markets have benefited many in France, they have left behind workers and small-business owners who lack the skills to profit from them.

And Macron’s policies are seen as exacerbating these inequalities and favoring the elites over the lower classes. Besides the fuel tax, his decision to abolish the wealth tax and plan to make university admissions more selective have added to Macron’s pro-elite image.

So how might it all end? Poujade’s movement, for its part, was able, at its height to win 52 seats in the French National Assembly. Poujadism did eventually disintegrate, but its longevity shows how it had tapped into something much deeper than a simple aversion to taxes.

This “something deeper,” a suspicion of the system, is shared by the yellow vests and explains why we should not be surprised that Macron’s backtracking on the fuel tax has done little to quiet the protests. 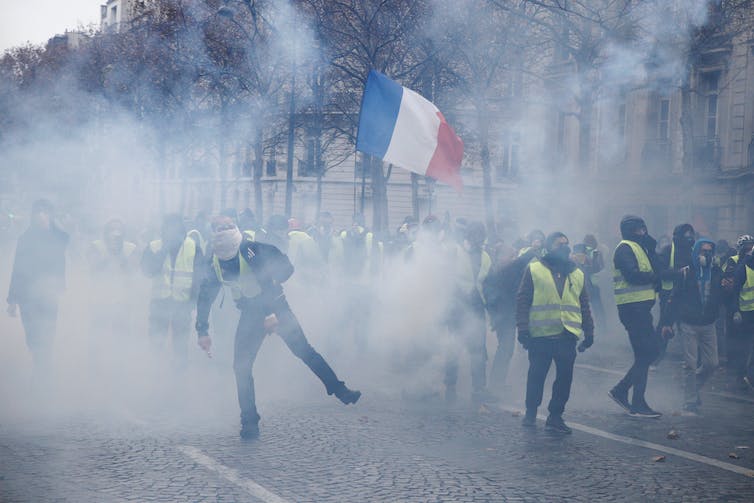 Riot police use a water cannon and tear gas against demonstrators. Alexandros Michailidis/Shutterstock.com

Populism around the world

Their rage against out-of-touch elites also links the “gilets jaunes” protests with other recent populist movements in Britain, the United States and elsewhere.

In all these places, populism has emerged as a result of the uneven distribution of economic gains that have accrued from globalization.

For example, while most elites have fully recovered their losses from last decade’s global financial crisis, nearly everyone else has seen their income and wealth little changed. This situation is especially galling for the many who blame those very elites for causing the crisis in the first place.

When Macron upended the French political system to become president in 2017, many hoped that he could channel the anti-elite anger brewing in France into his new, youthful party. But Macron’s paradoxical “centrist populism” has not delivered the change that many citizens sought, one reason the vast majority of the public supports the protests.

The “gilets jaunes” represent a reckoning. It is a reckoning that will take more than tax policy to avert, and one whose future impact will be difficult to predict.

After all, among the young legislators first elected on Poujade’s ticket was Jean-Marie Le Pen, a man who would go on to create the modern French far-right.