Remember When the Dodgers and Giants Moved West?

Lincoln Mitchell is a consultant and writer based in New York and San Francisco. His new book, Baseball Goes West: How the Dodgers and Giants Shaped the Major Leagues (Kent State University Press, 2018), explores the history of the two franchises, the move and their impact on baseball since 1958. 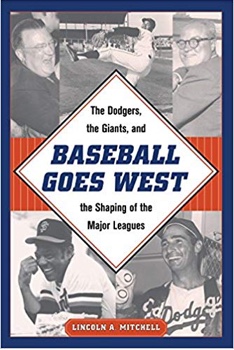 For many years now one of the rituals of the baseball season, along with spring training the All Star Game and the World Series is journalists and pundits announcing that baseball is less popular than ever and is no longer America’s game. This has become as much part of baseball as rookie sensations, tension filled playoff games, the news that another top pitcher needs Tommy John surgery and a big trade at the deadline. However, some perspective is necessary here. Baseball is by many measures, while perhaps in a slight downturn over the last few years, still popular. Stadium attendance is high, players and owners are making a lot of money and young stars like Javier Baez, Mike Trout, Manny Machado and Alex Bregman continue to bring new excitement and great play to the game.

One way to think about baseball’s popularity today is that in 201867,324,455 tickets were sold for big league baseball games in the US. This does not count the more than 2.3 million fans who saw the Blue Jays play in Toronto.

Despite this and other compelling data – for example in the Milwaukee Braves had the best attendance in baseball in 1957, averaging 31,649 fans per home date, a number that was exceeded by one third of all teams in 2018 – the notion that baseball is less popular now then in the so called “Golden Era” persists. The reason for this is the seeming paradox that while baseball today is a much bigger business than it was from 1900-1957, it plays a much smaller role in the national culture. For example, no player today is as well known or important to the national gestalt as Jackie Robinson or Joe DiMaggio once were. There are many reasons for this, but the one event that stands out in symbolizing and indeed accelerating this transition occurred after that 1957 season.

That was the year the Dodgers and Giants uprooted baseball’s oldest rivalry and two of the game’s most famous franchises and moved them to California. The symbolic and real impact of that move, not just on the two teams and three cities in question, but on all of big league baseball cannot be overstated. However, too frequently, the impact of the move is remembered symbolically through the lens of New Yorkers who felt betrayed by team owners Walter O’Malley and Horace Stoneham because they broke the hearts of devoted fans and took the teams across the country – taking with them our innocence, New York’s post-war greatness, our collective national youth and other sentimental nonsense. This view usually ignores the reality that many of those devoted fans stopped going to games by the mid-1950s, a period attendance for both teams dipped.

The real impact of the Dodgers and Giants moving to Los Angeles and San Francisco is frequently overlooked. April 15, 1958 when the Giants drubbed the Dodgers 8-0 at Seals Stadium, leading to a headline in the San Francisco Chronicle the next day stating “We Murder the Bums,” was second only to Jackie Robinson’s debut in 1947, the most important post-war event in the making of modern MLB. Within a few years, the Dodgers after moving into Dodger Stadium would shatter attendance and revenue records. The Giants, for their part, were trailblazers in bringing dark skinned players from the Caribbean into big league baseball as players with names like Cepeda, Marichal and Alou, by the early 1960s, were wearing Giants uniforms in All-Star and World Series games, while Willie Mays had eclipsed even Mickey Mantle as the game’s biggest star. In 1964, Giants reliever Masanori Murakami became first Japanese pitcher in our Major Leagues. By the end of the decade, more than 20% of all teams were playing on the west coast, for one year, 1969, that number reached 25%. In the first few years after the teams moved west, Negro League, semi-pro ball and domestic barnstorming ended for good and talk of a third league, that as recently as 1959 had been a real concern for the American and National Leagues, faded away never to return.

It is possible that all of these things would have happened if the two teams had stayed in New York and expansion teams had been placed in Los Angeles and San Francisco, but the name recognition and star players those two teams brought with them to California made it easier to break the deep ties fans in Los Angeles and San Francisco had to the Angels and Seals of the Pacific Coast League, for decades the best minor league in the country. Because the Dodgers and Giants were instantly contenders and remained so for their first decade in California, something that would have been impossible for an expansion team, MLB quickly became popular in the two biggest population centers on the west coast.

You can still hear older Brooklynites, and with much less frequently older Manhattanites, bemoan the loss of their franchise, but the widespread belief that O’Malley and Stoneham were heartless villains misses the larger point that without them, baseball would have taken considerably longer to become a major industry rather than a pastime that despite being deeply part of our national character was one where players had to sell cars or suits in the winter to make ends meet, while stars like Stan Musial, Robin Roberts, Ted Williams and yes Willie Mays and Jackie Robinson, frequently displayed their great skills in mostly empty ballparks.