Tabloid Photographers Are Hounding the Royals, but They Have a History of Using Each Other

Jennifer Tucker is historian of photography in modern British society and culture, the author of Nature Exposed: Photography as Eyewitness in Victorian Science (2006) and series editor of Photography/History: History/Photography at Bloomsbury Academic Press in London. She is Associate Professor of History at Wesleyan University and currently is co-chair of theRadical History Review journaland Image Editor of History and Technologyjournal. 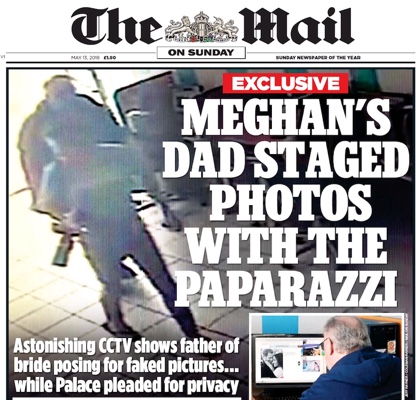 “Love is in the air” as the world awaits Prince Harry and Meghan Markle’s wedding on Saturday. But love is not the only emotion – for where tabloid press photographers are concerned, there is also a lot of fear and loathing.

Prince Harry has been deeply protective of Ms. Markle since their relationship was made public, issuing a strong statement in 2016 after what he called a “wave of abuse and harassment.” Now, it seems, even the bride-to-be’s fatheris vulnerable to the predations of press photographers.

This week, the world gasped at the notion that Thomas Markle might have staged photographs of himself preparing for the wedding – to have more control over how he was seen in the public eye. But since when are press photographsnot,in some sense, staged? The Royals themselves are not above cavorting with the daily tabloids to harness a little good publicity when necessary. (Case in point: The Daily Mirror in 1949 featured front page portrait photographs of the King and Queen, below a headline that read: “King George and Queen Mary congratulate The Daily Mirroron World’s record of 1,000,000 copies a day.”)

Portraits of the Royals are not exactly Candid Camera.

Long before Thomas Markle became a tabloid scandal, the famous Royal photographer Cecil Beaton (played to great effect by Alexi Lubomirski on the British TV series “The Crown”) publicly mused that “many younger members of the Royal Family know exactly how best to face the onslaught of the camera and instinctively pose to the greatest advantage when confronted by a battery of press photographers. The Duchess of Kent knows to lower her chin, Princess Margaret when to raise hers."

The upcoming Royal wedding is a good opportunity to reflect on how the public’s relationship with the monarchy has been transformed dramatically by the invention of photography.

In my own research I trace the role of photography since the nineteenth century in surveillanceof ordinary citizens – and in monitoring the activities of political and cultural celebrities. London – and Buckingham Palace, to be even more specific – sits at the heart of a fierce and unsettled debate about press intrusion and access that has roots that trace back more than a century.

Long before Prince Harry and Meghan Markle became among the most photographed people in the world, the Royal family was raised in the glare of the flashbulb. According to visual historian Ryan Linkof, author of a new book, Public Images: Celebrity, Photojournalism, and the Making of the Tabloid Press, the rise of the tabloid photographer literally changed how the British people viewed the monarchy, establishing a new idiom of approaching the British royals based on visual immediacy and documentary access.

The relationship between the Royals and the camera can be traced back to the early 19th century. The reign of Queen Victoria, who ascended the throne in 1834, coincided with the advent of photography, and she was enthusiastic about its potential. Her court photographers helped produce the image of the young, domestic monarch as a matriarch with a large family and seemingly bourgeois, conventional attitudes. Her husband Prince Albert – like the Duchess of Cambridge, Kate Middleton – was himself a devoted photographer. (The Royal couple even looked at photos of princesses when choosing a potential bride for their son, the Prince of Wales.)

Queen Victoria’s reign also saw the proliferation of the world’s first illustrated newspapers. By the time of her death in the early 1900s, British newspapers such as the Daily Mirror – “the world’s first tabloid,” founded in 1904 – made extensive use of the candid snapshot photograph, helping to create our modern understanding of celebrity voyeurism.

Edward VII (who reigned from 1901-1910) was the first British monarch to frequently confront press photographers, objecting to Fleet Street’s tactics in their efforts to gain candid photos of the Royal family. (Some photographers smuggled into bread trucks trying to capture photographs of the royal children.) Even in death, the King couldn’t avoid photographers: One week before the funeral, the Daily Mirror’s art editor hunted down the original negative of the King lying on his deathbed, and published it on the newspaper’s front page with the caption, “another magnificent photograph of the late King Edward.”

Without significant constitutional power, the Crown’s authority increasingly came to depend upon its public image and majestic rituals. Edward’s heir, George V, shared his father’s suspicion toward the press, and allowed only one press photographer to attend his coronation.  George V’s oldest son. Edward, took the throne as Edward VIII in 1936. He was a handsome, self-assured young man who made perfect copy for the tabloid press. Much like Meghan Markle, he related well to many press photographers. The Daily Mirror’s photographer Bernard Grant said Edward was “The most photographed man in the world.”

However, the press coverage of the adulterous relationship of Edward and American divorcee Wallis Simpson angered Conservatives and forced the King’s resignation in 1938.

Clearly, the Royals’ growing reliance on the illustrated press for favorable treatment was a double-edged sword. This became tragically evident in 1997, when the media frenzy that accompanied the marriage and divorce of Princess Diana would culminate in Diana’s tragic death in a car accident in Paris, fleeing a pack of paparazzi.

To this day, tabloid newspapers continue to play a disproportionate role in British politics and society. For example, 80 percent of British newspapers supported Brexit, and their ceaseless anti-Brussels coverage was a key factor in the 2016 vote to leave the European Union. Once again there is a royal connection: in March 2016 theSun tabloid ran a front-page headline “Queen backs Brexit” (which a press watchdog later found to be false).

As the world media covers the Royal Wedding on Saturday a chorus of commentators have already decided that Ms. Markle, a professional actress, will bring to the relationshipa shrewd understanding of how to deal with publicity and the media, an understanding that her father (and most of the rest of us) lack. But she will be joining a long-line of media-savvy Royals.

Long before the digital era, the modernization of the British royals was entangled with the story of the camera. In fact, it would be no exaggeration to say that the history of tabloid photography is a revealing – if often repulsive – key to understanding the nature of news and information in the twentieth-first century.