Jeff Tyler is a professor of religion and chair of the Department of Religion at Hope College. 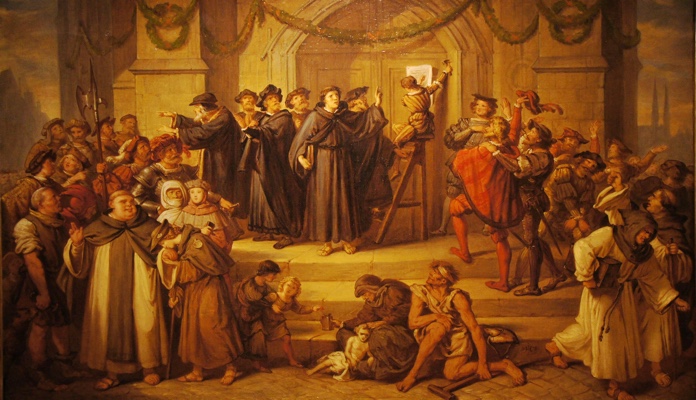 Luther's posting of the Theses before a crowd - by Julius Hübner

500 years ago, Martin Luther took up his quill and etched out 95 Theses: a collection of clipped and pungent statements regarding preachers and popes, penance and purgatory.  This unlikely string of sentences launched a public career that would render Luther a national hero, religious leader, and hunted outlaw.  These 95 short statements stoked controversy both because they challenged church authority and because they became 16thcentury tweets of a sort—and those tweets made it possible for Luther’s writings to go “viral.”

The way the 95 Theses went viral, though, may have little to do with the scene we usually picture. October 31, 1517: Luther stands before a church door attired in his monk’s habit—the monastic hoodie of his day. With one hand, he flattens his 95 Theses across the door; with the other hand, he nails them fast. Each hammer blow electrifies a Wittenberg crowd eager to witness the end of religious tyranny and the birth of a bold new world. Luther’s hammer blows still echo among those commemorating and celebrating the 500th anniversary of the Reformation in 2017.

Yet it’s possible that Martin Luther did no such thing. He never once mentions nailing up his Theses. No one tells the dramatic story or speaks of the event for 20 years. There was likely no cheering throng to mark the occasion or revel in Luther’s document, a Latin document most could neither read nor understand.

Instead, Luther sparked a media revolution that cemented his legacy and reshaped religion in Europe, the Americas, and the world. In brief, Luther posted his 95 Theses—in the mail.

With the recent invention of the printing press, Luther’s decision to mail his Theses to church authorities and, then, to collegial friends led to their printing and to their rapid and widespread dissemination. While the brevity of the 95 Theses invited supporter and critic to take up and read, the resulting media storm emanating from one short document gave the 95 Theses their symbolic value—quite apart from their dense theological content.

Luther’s 95 Theses are tweet-like in a way. Each of the sentences, most of which are less than 140 characters in length, aims to provoke debate, expose abuses, and advocate for change. Some of his statements are ‘twitteresque’ in both brevity and content. Thesis 27—perhaps the most well-known—restates a common German rhyme:

“When a coin in [the preacher’s] money chest rings, a soul from purgatory springs.”

This line captures Luther’s frustration with public preachers who were peddling God’s forgiveness for a price. In Thesis 28 he suggests that, in reality, such collections only serve to increase the “profits” and greed of the church; meanwhile release from purgatory is up to God.  One can almost imagine the hashtags of his day following it.

Though twitter-like in their ability to spark controversy, Luther’s 95 Theses were hardly eye-candy. Readers today still find the argument he makes throughout this short document and the theological language he uses difficult to penetrate. This is not surprising, for the very format of the Theses reveal Luther’s original intent: to alert church leaders and to spark debate among fellow colleagues at the University of Wittenberg.  It is possible that Luther or someone else did nail up his Theses on church doors, in compliance with University policies regarding a proposed academic debate. Such doors were the bulletin boards—and Twitter feeds—of the sixteenth century.

Once the 95 Theses brought hostile scrutiny to Luther, he unleashed a flood of printed works in Latin and German to defend his cause, clarify theology, and reform church and society. As publications poured forth from his pen, Luther would come to harness and develop a talent he did not know he possessed. In addition to an astounding run of longer treatises and books, Luther proved to be a natural at composing pamphlets in German—bite-sized and pithy for a ravenous reading public.

Andrew Pettegree of St. Andrews University has pointed out that Luther developed what we would today call his own distinctive “brand.” He had an uncanny sense of the aesthetics of print for books, pamphlets and sermons. He was a natural at articulating, envisioning, and monitoring the production of his works. Even at a glance Luther’s publications would stand out in a book-sellers stall and catch the eye of customers familiar with Luther’s brand—the illustrations, layouts, and fonts of a typical Luther publication.

Unrestricted by copyright laws, printers across Germany and Europe seized upon Luther’s various works and produced their own print-shop editions to dramatic sales. Perhaps only in this 21st century—in our own digital and social media revolution—can we fully appreciate Luther’s genius and the media that birthed a Reformation.