Who Would Think to Pair Andy Warhol and Norman Rockwell? 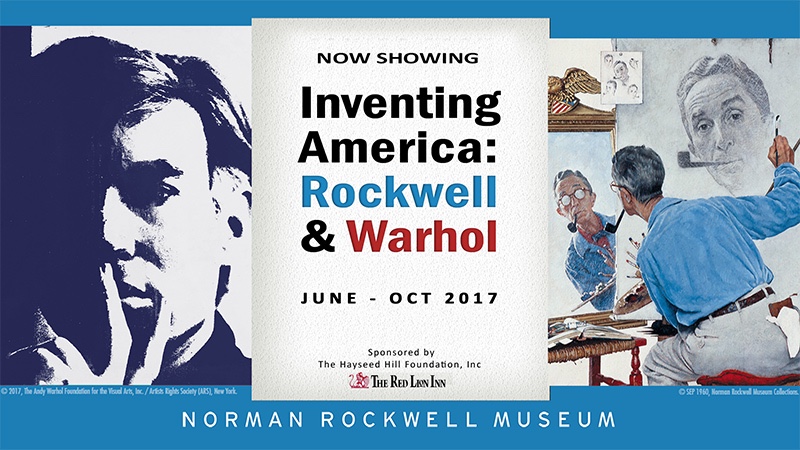 What two artists could be more different than Norman Rockwell and Andy Warhol?

Rockwell was a traditionalist who, over the decades, created small town, middle class, rock solid, true blue America for millions of readers of the Saturday Evening Post magazine and the commercial world. His America was the dog lounging on the grass, front porch socials, town meetings, summer afternoons at the ballgame, bike riders and little kids holding hands and drinking sodas. Warhol’s America was the huge, iconic Campbell’s soup can, eerie silk screen paintings of Marilyn Monroe and Liz Taylor, off the wall moviemaking at his oddball New York film studio, The Factory, chats with Bob Dylan and wild nights at New York nightclub Studio 54 with Liza Minelli, Bianca Jagger and his other celebrity friends.

Yet the curators at the Norman Rockwell Museum, in West Stockbridge, Massachusetts have paired the two opposite artists of the cultural spectrum together in a fascinating new exhibit, “Inventing America: Rockwell and Warhol,” that just opened.

The carefully staged and very impressive exhibit, with over 100 works of art and personal items of the two painters, shows that while they were on the surface completely unlike each other, they were, behind the easel and camera, very much the same. They saw two Americas, one down home and the other neon lit, but they also saw the same America, just in different ways.

And, together, in their own way, they re-invented it.

Warhol was a great admirer of Rockwell and purchased several of his paintings and had them on display in his home. Warhol also used Rockwell’s work for inspiration. When you enter the museum’s exhibit hall the first thing you see is Rockwell’s large painting of actor Tyrone Power Jr. in the film The Razor’s Edge. Next to him is a Warhol sketch of a 1970s man looking exactly like Power.

In the exhibit, visitors learn a lot about Rockwell and the '40s and '50s America he lived in, none of it terribly new, but they will be surprised by what they learn about Warhol, who, it turns out, did not start out as the wild artist at all, but a poor kid from Pittsburgh.

They were very much alike. Both men began their careers as commercial artists, doing illustrations for advertisers. Both liked to sketch political figures and often did paintings of the same ones, such as John F Kennedy and Richard Nixon. Both produced paintings and images of racial and political situations in the '60s and '50s. They loved celebrities. Rockwell painted a dozen stars of the film Stagecoach and created movie posters and Warhol did works on stars like Grace Kelly and his celebrity buddies such as Minelli, Jagger and dozens of others for magazine and record album covers.

They both became famous at a young age with supermarket works, Rockwell with Kellogg’s corn flakes boxes and Warhol with Kellogg’s silk screens. Their methods were different, though. Rockwell’s boxes were colorful middle America breakfast time drawings and Warhol gave us a stark, black and white photo with everything backwards that was almost menacing.

They were different artists but became pop cultural heroes because they saw America in a different way. “Norman Rockwell and Andy Warhol looked at the world from different vantage points to embrace innovation while satisfying, in unique and personal ways, the aspirations of a broader, popular audience,” said Rockwell Museum curator Stephanie Plunkett in a statement.

Both men invented themselves. At just 17, Rockwell became the art director of Boy’s Life magazine and quickly established himself as a small town, Fourth of July wave-the-flag artist. Warhol did something similar. He turned Andy Warhol from a poor sick kid into a celebrity superstar and in fact, people said, re-invented himself again and again to suit the needs of his audience.

They were opposites, too. The museum has hung works of the two men next to each other to show their differences. Rockwell’s famous “Freedom from Want” painting of a Thanksgiving meal is right next to the fabled Warhol Campbell’s soup can image (ironically, all of his 32 soup can works are now owned by the Museum of Modern Art in New York, an institution that refused to exhibit any of them during his lifetime). Rockwell’s JFK magazine cover, finished during the 1960 campaign, is next to a ghastly silk screen of the President by Warhol done just after his murder. A lovable Jackie Kennedy painting by Rockwell is hung next to an eerie silk-screened Jackie by Warhol. Rockwell’s Nixon is Presidential to be sure, but Warhol’s pinkish Nixon is right out of a Saturday Night Live sketch.

Right here is where the museum gives us a surprising and wonderful portrait of Warhol as a young and unknown man. The Campbell’s soup can sketches that made Warhol an international star were done because, the exhibit reveals, as a poor kid he and his brothers survived by eating Campbell’s soup (Warhol said he had the soup for lunch every day for twenty years). He also saw the soup can as a doorway to America and his art and completely understood the needs of the America public.” The richest consumers buy essentially the same things as the poorest. You can be watching TV and see Coca-Cola, and you can know that the President drinks Coke. Liz Taylor drinks Coke, and just think, you can drink Coke, too,” he said.

Warhol was quite sickly as a child. He was a victim of rheumatic fever and St. Vitus Dance (body shaking) at the age of eight and lost most of his hair, had a bulbous nose and blotchy skin for the rest of his life. He underwent surgery to correct his nose, used makeup on his skin and wore that famous white-haired wig to cover his thinning hair.

His illness changed his life. It was then, as a kid, pretty much bed-ridden, that young Warhol fell in love with Hollywood and celebrities. He had nothing to do while sick, so he watched television all day long and fell in love with movie musicals on the tube. He read all of the movie magazines, kept thick scrapbooks of celebrities and films and wrote away for, and received, autographed photos of numerous stars. He had more than 100 photos of Monroe in his collection. He loved Shirley Temple and had pictures of her in her film Poor Little Rich Girl and later produced a movie and called it Poor Little Rich Girl. He carried this love of celebrities and the glitz of moviedom with him all of his life.

Warhol loved the supermarket and did Brillo images as part of his work. He also did a famous sketch of a sheet of the S & H green stamps that millions of American used to pay for supermarket items in the 1950s.

Middle-class Rockwell was born and grew up in New York City and later moved to New England. Warhol was born into poverty in Pittsburgh and worked his way through college, earning a degree, and then moved to New York. Rockwell was a very healthy man. He was married three times, rode around town on a bike and exemplified the middle-class man. Despite their differences, the two gifted artists gave us a memorable look at our history.

One of the most intriguing aspects of the exhibit was how the two men staged their paintings and photographs, and did so all the time. Norman Rockwell did not paint America as he saw it, but as he wanted to see it. He used friends in his art work, added in photos of woods and skies from other parts of the world and staged his images, like the famous photo of mom bringing out the turkey dinner on a platter for Thanksgiving. One of Rockwell’s most famous photographs, an 18’ by 60’ photo that hung in New York’s Grand Central Station, was of a group of people getting ready to go on vacation. It was not. It was a series of different pictures that he edited together as one shot. Warhol, of course, did the same thing, changing the look of movie stars and First Ladies through his imaginative silk screenings

The most interesting shot in the exhibit is a photo of Warhol in a supermarket with items that he had painted in his shopping cart. He has no makeup on, ordinary brown hair and is dressed in middle class clothes. He looks like of those Americans that Rockwell had painted over the years and all of the middle-class folks who admired his work.

Maybe, despite their enormous differences, the two artists were pretty similar after all.