Marc Aronson is the co-author of a new book, Eyes of the World: Robert Capa, Gerda Taro, and the Invention of Modern Photojournalism (Holt, 2017). Aronson is the first winner of the Robert F. Sibert Medal for Excellence in Nonfiction and a member of the faculty in the Master of Information program at Rutgers University. 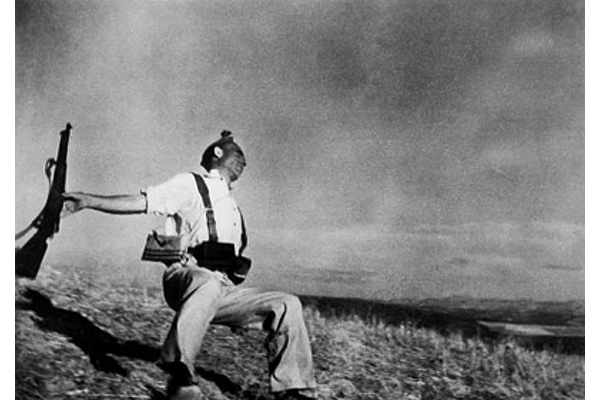 My wife and I have spent a good part of the last two years writing a new book, Eyes of the World: Robert Capa, Gerda Taro and the Invention of Modern Photojournalism), focusing on the lives and careers of two groundbreaking photographers who became famous for capturing the images at the front lines of the fight against fascism in 1930s Spain. As we poured over photographs and letters, memoirs and newspaper articles, we expected to dive into the era of the Spanish Civil War, but, instead, our research turned out to be a lesson in present-tense history. 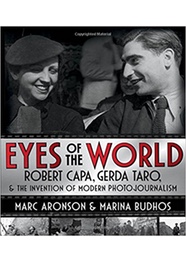 Researching and writing about the rise of nationalist, anti-immigrant, proto-fascist movements led by demagogic figures in the mid-1930s amid current events, such as the Brexit vote and the long, contentious United States presidential campaign, gave us the sense of living in two overlapping time periods. As we examined images Capa took of Popular Front crowds at the Place de Republique in Paris, we saw on the news pictures of the rally held after the Charlie Hebdo murders.

Capa and Taro went off to Spain to use their cameras in the fight against fascism and Franco. Hitler had his new military weapons; they had the new, fast, 35 millimeter still camera. They hoped the pictures of revolutionary couples, orphans, soldiers being shot, and burning buildings would awaken readers throughout the West and lead England, France, and America to intervene. Capa and Taro were encouraged in that hope by the advent of the new photo news magazines such as Vu in France and Life in America that were reaching millions of readers. Photography could bring the war in Spain home as no war had ever been before. But photography’s power proved limited. Today it’s the heartbreaking image of a drowned Syrian refugee child flashed around the world on our new interconnected media that shocks the conscience. Then it was the pictures of war refugees fleeing Franco’s destruction. Both times governments made the choice not to intervene.

Capa and Taro were Jewish refugees escaping from fascists in Hungary and Germany to the fragile and temporary safety of Paris. As Franco’s forces moved across Spain, more and more of our photographers’ photos showed frightened refugees on an uncertain road to somewhere. And now, as our current government seeks to seal our borders, a new generation of frightened refugees from Iraq, Afghanistan, Syria, Africa, and Central America seek shelter.

We are living then and now.

There is a specificity of each historical time and place, yet there are conclusions at least worth exploring. The first and most frightening is simply that what seems ominous may truly be ominous. For Taro, once a fashionable middle class girl growing up in Germany, politics and the camera were an awakening. When she fled to Paris her own family desperately tried to get visas for Palestine. Recording young soldiers giving their lives to fight fascism became an existential passion for her. They must win, her photos seemed to say – though, of course, they didn’t and neither Taro nor her family survived. On a larger scale, Capa and Taro and their allies on the Left believed that if Franco, Hitler, and Mussolini were not stopped in Spain, worse would follow. They were right to the year: Franco won in the pivotal year of 1939. The trajectory of the 1930s warns us of the potentially extreme consequences of the hatreds whipped up by populist leaders around the world today.

The photographers’ hope that images in the new magazines – along with films, newsreels, posters – would change the mind of voters across the West were not realized. Opinions remained frozen: you saw, or were moved by, the images that supported what you had already decided. The press was equally divided. While Herbert Mathews of the New York Times wrote of the idealistic heroism of the Spanish Republic and the International Brigades, writers in Catholic, pro-Franco papers wrote of priests being murdered and nuns raped. Then, as now, people lived in niched media markets and filtered information to confirm their beliefs. There was also the looming shadow of Stalin.

Stalin launched the purge trials in Moscow exactly when he chose to intervene in Spain. Stalin’s monstrosity was explained away by too many on the Left and seized upon by those on the Right. Indeed when the Soviets remade the army of the Republic, Taro took photos designed to stress the new uniformity and discipline: propaganda shots. Neither Capa nor Taro photographed any Franco supporters or soldiers in sympathetic images: their photos were allied to a cause.

The matter of propaganda leads to the questions around Capa’s famous picture: The Falling Soldier. We know where and when it was taken and there is no record of a firefight there and then. Staging shots was an accepted practice that Capa and Taro occasionally employed. Yet random deaths took place all of the time and there are also good reasons to believe the image is what it claims to be. It is unlikely that we will ever know for certain what the image records. We have to treat it as we do all historical evidence: a palimpsest on which many narratives have been written, as narratives will be written about events from our time by generations going forward.

After Taro lost her life and Spain fell and the entire world plunged into war Capa changed his perspective – showing pain and humanity wherever he found it. He was not interested in sides any longer but in human feeling. Capa focused on the heroism not about a cause alone, but of truth: speaking for what you believe in, even when that may seem to undermine, or break ranks with your most precious causes.

Writing Eyes of the World was sobering and inspiring. It brought us back into the complexity and density of the past, and forward to face our own moment today with greater urgency. As we investigated the extraordinary images Capa and Taro captured in war and experienced the moral clarity of their work, the pioneering photographers helped us to see our own time with fresh eyes.