The Pioneering Feminist, Freethinker and Abolitionist History Forgot (And then Found) 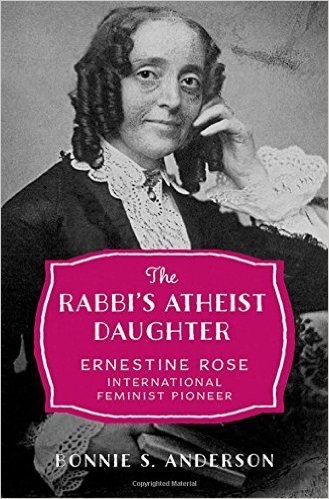 In the 1850s, Ernestine Rose (1810-1892) was one of the most famous women in America –- far better known than her co-workers Elizabeth Cady Stanton and Susan B. Anthony.  An outstanding orator in an era when women seldom spoke publicly, Rose had “as great a power to chain an audience as any of our best male speakers,” a New York newspaper declared.  She had an international reputation: “Her eloquence is irresistible.  It shakes, it awes, it thrills, it melts – it fills you with horror, it drowns you with tears,” wrote a British sympathizer.  “They who sat with her in bygone days on the platform will remember her matchless powers as a speaker,” Anthony reminisced in the 1880s, “and how safe we felt when she had the floor….”  Her amazing life deserves to be restored to U.S. history.

At the height of her career, Rose lectured in twenty-three of the existing thirty-one states.  Best-known for being a “woman’s rights woman,” as feminists were then called, Rose was equally passionate about the abolition of slavery.  Actively opposing both segregation and notions of black inferiority, she demanded ”the recognition of human rights, without distinction of sect, party, sex, or color.”  After the Civil War, she supported suffrage for all.  “White men are the minority in this nation,” she asserted in 1867.  “White women, black men, and black women compose the large majority.”   In addition, she was a life-long “Infidel,” the term used to stigmatize non-believers, and often the only woman speaking for freethought in the United States.  From her teenage years, she believed  that all religions were “the great curse of the human mind, the great standing block in the way of human progress.”

Ernestine Rose had a unique personal history.  The only child of a Polish rabbi, she abandoned her faith at sixteen.  Her recently deceased mother left her an inheritance and her father then betrothed her to a man she did not want to marry.  So she traveled by sleigh to a Polish court, pleaded her case, and won.  She then left her family, Poland, and Judaism forever.  After living in Berlin for two years, she moved to Paris, where she witnessed the Revolution of 1830.  Next, she lived in London, where she became a follower of Robert Owen, the famous industrialist-turned-socialist.  In Owenism, she  first spoke publicly and met her beloved and devoted husband, William Rose.  In 1836, the couple emigrated to New York City, where they lived for the next thirty-three years.  A few months after they arrived, she carried a petition around lower Manhattan for married women’s property rights and later helped build the early women’s movement.  In that group, she remained the only foreigner and freethinker – everyone else was both native-born and Protestant.  She was also the lone Jew, a fact carefully detailed by her friend, the Quaker Lucretia Mott, who introduced Rose as “a Polish Lady and educated in the Jewish faith” at an 1852 convention.  Which of these factors: being Jewish, an atheist, a woman, or a “foreigner,” as she was always called, contributed most to her being written out of U.S. history?

Perhaps surprisingly, antisemitism was the least likely cause.  During Rose’s time in the United States, there were only 150,000 Jews out of a population of 31.5 million in 1860 and most Americans never would have met a Jewish person.  Antisemitism existed, but there are only two instances of Rose encountering it directly.  First, Lucy Stone, a co-worker in women’s rights, wrote Susan B. Anthony criticizing Rose for looking Jewish, being avaricious and concerned only with herself.  But Anthony, Rose’s closest friend in the movement, paid no attention and soon afterwards backed Rose’s becoming President of the 1854 National Woman’s Rights Convention.  Second, Horace Seaver, the editor of the Boston Investigator, a freethought newspaper Rose often wrote for and which frequently praised her career, published a series of antisemitic editorials in 1864.  These attacked not only the ancient Hebrews, who were frequently denounced by atheists, but also modern Judaism for being “bigoted, narrow, exclusive, and totally unfit for a progressive people like the Americans, among whom we hope it may not spread.”  Rose unsuccessfully rebutted Seaver in a series of public letters.  After a few years, however, she resumed her friendship with him.  Despite her atheism, Jewish groups continued to champion her – the first biography of Rose, written in the 1950s, was sponsored by Jewish Women’s Clubs.

In her own day, her atheism was a far greater stigma than her Jewish identity.  “We know of no object more deserving of contempt, loathing, and abhorrance than a female Atheist,” a Maine clergyman wrote about her in 1855, “We hold the vilest strumpet from the stews to be by comparison respectable.”  But the antipathy for disbelief declined in the twentieth century and does not seem to have been a significant reason for Rose’s disappearance from American history.

The Roses leaving the United States in 1869  to live in England was more important.  They only returned to the states for a single visit and Ernestine remained in England after William’s death in 1882 until her own in 1892.  Although she received visits from American friends and tributes from U.S. freethought journals, leaving the United States contributed to her being forgotten.  But I believe that the most important factor was her womanhood.  For the first half of the twentieth century, very few female protagonists figured at all in U.S. history.  In 1871, the Boston Investigator predicted that Ernestine Rose would be appreciated “in about a hundred years,” a prediction which came true in large part because of the revived women’s movement of the 1970s.  Thanks to the contributions of historians of women over the last fifty years, figures like Ernestine Rose are now part of the American narrative.