Compromise as the Constitution’s Foundation

David Brian Robertson, the Curator's Distinguished Teaching Professor of Political Science at the University of Missouri-St. Louis, is the author of "The Original Compromise: What the Constitution’s Framers were Really Thinking" (Oxford University Press, 2013). 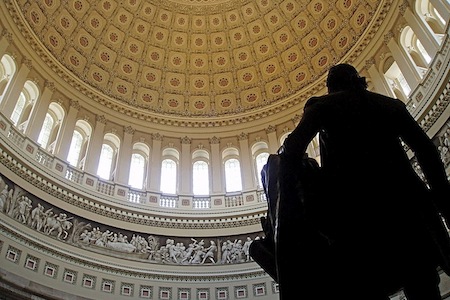 Practical politicians – like the very human politicians portrayed in the movie Lincoln – wrote the U.S. Constitution. Deep mistrust and bitter disagreements divided these politicians, as they did in the Civil War era and as they do now, in the fight over sequestration and the budget deficit. They negotiated their way through these differences; compromise produced the Constitution, as it later produced the Thirteenth Amendment and the other landmark measures of American government. Their own compromises left us a government that cannot work without compromise.

Compromises on representation in Congress, presidential election, slavery and commerce, and many other issues drove the Convention forward. The framers fully employed all their substantial political skills, including bargaining, side deals, delay, evasion, and deliberate ambiguity. To win the votes of wavering delegates, the delegates accepted provisions some considered pointless, most notably the power of the House of Representatives to originate tax and spending measures. They evaded the mention of slavery to make the Constitution less politically objectionable – even though all understood that the document protected slavery and the slave trade. They approved ambiguous phrases like “necessary and proper,” “general welfare,” and “direct taxes,” because these imprecise words were expedient.

Some delegates surrendered dearly held goals along the way. James Madison -- the “father” of the Constitution -- was very frustrated that the new government lacked the broader powers he sought, such as clear authority over all commerce (including commerce within the states), and the explicit power to develop canals, roads, and a national university. Madison insisted that the national government needed “an indefinite power” to veto any state law, urging that this national veto was “absolutely necessary to a perfect system.” In a private letter to Thomas Jefferson, Madison expressed disappointment and pessimism about the Constitution (meanwhile, he was touting the Constitution’s strengths in The Federalist newspaper essays).

The framers fully embraced these compromises. Rather than leave the Convention after losing a key vote, most of the delegates stayed to finish the job. Madison and his allies stayed even after the Great Compromise wrecked their insistence on a Senate that would give more votes to states with larger populations.

No delegate was fully satisfied with the Constitution these compromises produced. George Washington wrote that “it is the best that can be obtained at the present moment under such diversity of ideas as prevail.” Alexander Hamilton considered it “better than nothing,” and Gouverneur Morris took it “with all its faults.” All signed the Constitution and urged its ratification.

The intent of the framers was to write a durable rulebook for a national republican government. This rulebook would have to weather the vibrant republican politics that already permeated the United States. They did not intend to eliminate politics. No mere words (or “parchment barriers”) could do so.

The framers, then, wrote the Constitution principally for politicians to use. The framers accepted that political ambition inevitably would put life in the new government to life, as it brought all governments to life. The framers intended to harness political ambition so the national government would do more good than harm. For example, the Convention rejected term limits for elected officials because they understood that reelection would give naturally ambitious politicians a strong incentive to serve the voters’ favor. They created a government of separate institutions, and tried to ensure that institutions responsive to their interests had the will and ability to defend its independence against ambitious rivals. The Constitution ensured that separated institutions would have to share power – and to compromise -- to make the government work.

Most of the framers themselves injected these politics into the new government. Most served as U.S. Representatives or Senators, members of the Cabinet, federal judges, or ambassadors. Washington and Madison were twice elected president. Madison helped create the Democratic-Republican Party.

The Constitution makes compromise necessary and difficult. The delegates built a government in which majorities ruled -- but deliberately made it very hard actually to construct majorities. The Constitution created a government that has been easy to use when everyone agreed, but hard to use when they are passionately and evenly divided – as they are now. When there is bitter political disagreement, the Constitution’s government only works when politicians, like the framers, use all of their political skills of negotiation and compromise to reach agreement on the use of government.

When we understand that the framers were politicians instead of demigods or detached philosophers, we more fully appreciate the true nature of their humanity and their nobility. If today’s office-holders appreciate the fundamental requirement of compromise in this system, they can better achieve goals that provide wide benefits for America and the world.