Jim Sleeper lectures in political science at Yale and posts frequently at TPM. He has been a New York newspaper columnist and is the author of The Closest of Strangers and Liberal Racism. His website is www.jimsleeper.com. 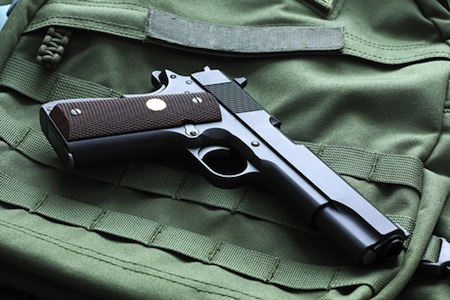 Behind the gun control debate lies a deeper one that we need to have. It would show that the danger to our freedom isn't coming from government censors and conspiracies but from marketing sensors that are bypassing our brains and hearts on the way to our gut instincts and wallets.

This groping and goosing of America isn't "speech." It's an assault that's adding to the kind of violence that we're enduring. Gun control is absolutely necessary here, but not sufficient, and it won't even happen unless we can first dissolve the deep bond between our libertarian individualism and our glorification of runaway corporate engines that disrupt public trust more brutally than their own managers even intend or know how to stop.

We're so deluged now by "violence without context and sex without attachment," as Senator Bill Bradley put it in 1995, that more Americans accept depictions of torture impassively than would have done so when Bradley spoke. And more now think that gun ownership is their only way to safety.

A republic can't shape its aggressive, impressionable youngsters into citizens who trust one another unless it can nourish the public narratives, myths, or constitutive fictions that give kids direction and hope.

We can't and shouldn't try to legislate great public narratives or censor bad ones. One answer to movies like Zero Dark Thirty, which lowers the bar against torture by depicting it as standard American practice, is to criticize media violence passionately and comprehensively, as Don Hazen and Jan Frel do in Alternet, or with cool discernment, as David Bromwich does in an assessment of Zero Dark Thirty here in HuffPost.

Here I'm not referring to Zero Dark Thirty, whose creators are definitely the "speakers" we must protect, even if we dislike their messages. I'm referring the degrading advertising and violence churned out by companies that hire "artists" only for one purpose: to grab us below the brain and heart in order to maximize profits.

It's this that we can and should curb. Law Professor Daniel J.H. Greenwood explains why in a brilliant law review essay, "Essential Speech: Why Corporate Speech is Not Free," that I teach in my Yale seminars on "Journalism, Liberalism, and Democracy" and that everyone concerned with these issues should find the time and discipline to read.

Greenwood and I have co-authored a shorter essay in The Atlantic that summarizes some of these arguments and links them to the challenge of generating better social narratives -- a challenge I mentioned again yesterday in and even shorter essay in the Philadelphia Inquirer.

Even while we rightly prevent government from selecting our civic stories, we can protect those stories' creation, however varied they may be, from asphyxiation by sophisticated market sensors that simulate violence and sex, not in order to tell us any story or advance any argument or art, as human speakers in a republic would do, but simply to grope us and goose us in the ways I've mentioned.

We can also stop these runaway engines from inundating political debate about how to cope with this crisis. Freedom of speech means nothing if these entities have megaphones and you have laryngitis from straining to be heard. (Recall that Occupy Wall Street protestors were denied even street megaphones.)

When mistrust and fear proliferate, words become more empty, deeds more brutal, and more people arm themselves against one another and then try to relieve the stress by blaming minorities, saluting demagogues, and embracing frantic solidarities.

There's nothing wrong with fathers taking their sons hunting or helping them join rifle clubs. I learned to fire a Smith & Wesson .22 at summer camp when I was 10 and 11. But people who love their guns too much suffer a failure of civic imagination. They can't explain how unarmed masses in British India, South Africa, Soviet-dominated Eastern Europe, and even our segregationist South brought down well-armed regimes without firepower. Those people succeeded partly because most of them weren't armed against one another and so could trust one another.

The cure for our paralysis and violence will begins with reconfiguring the socially mindless corporate wrecking balls that we, through government, created. Over-regulation would stifle markets, but sometimes markets do have to be saved from themselves.

We did it in the 1930s and in 2009, reminding ourselves that sometimes a republic must be sovereign over economy. But we can't do it if business leaders capture the regulators or if their global reach dissolves the republican sovereignty and virtues that markets themselves require. We, the people, set up and licensed business corporations to amass tremendous profits, but we retain sovereignty over these tools, which are not our equals.

We needn't wait for social science to prove that barbarically violent video-games cause violence. The Supreme Court didn't accept such findings by social scientists in its Brown v. Entertainment Merchants Association ruling in favor of the corporations, but even when the Court has accepted social-science findings -- as in its most famous Brown case, of 1954, against racial segregation -- actual change required a difficult, extra-legal politics of persuasion, sustained by public myths, or constitutive fictions, that weren't scientific at all.

The Civil Rights Act was passed in 1965 thanks to a consensus woven by years of non-violent persuasion among citizens sharing a powerful myth (in the South, a civic-Christian one) that overcame their deepest fears and resentments. Ultimately, we couldn't and didn't rely on social science to prove the harm done to blacks, and therefore to the whole society, by "separate but equal" facilities.

Thanks to its more powerful civic myth, the civil rights movement "disarmed" its white adversaries by crediting them with integrity and dignity even while exposing their shortcomings. But when good civic myths like that are dissolved, democratic resilience dissolves, too.

The irony is that -- and here I don't mind repeating myself -- the wrongdoers who produce anomically violent "entertainment" aren't malevolent as much as they're mindless. As Greenwood and I argue in The Atlantic, gun merchants and producers of the worst video games who try to boost sales by perverting good sportsmanship are only doing what corporate law and their corporate charters make them do: anything "lawful" that will maximize shareholder returns.

We can change that. And, with a politics of persuasion like that of the Civil Rights movement, and with a better corporate jurisprudence, we will.